QDL is a Qualcomm tool that can be used to program (or unbrick) Snapdragon based devices.

How does it work?

Snapdragon based devices contain a special mode of operation, called Emergency Download Mode (EDL). In this mode, the device identifies itself as 05c6:901d Qualcomm, Inc. via. USB and can communicate with a PC host.

EDL mode itself implements the Qualcomm Sahara protocol, which accepts an OEM-digitally-signed programmer over USB. The programmer implements the Firehose protocol which allows the host PC to send commands to write into the onboard storage (UFS).

An open source tool (for Linux) that implements the Qualcomm Sahara and Firehose protocols has been developed by Linaro, and can be used to program (or unbrick) Snapdragon based devices.

A couple different libraries are required to build the QDL program, install them using the following:

Some Linux distributions come with ModemManager, a tool for configuring Mobile Broadband. This program, if installed, will interfere with the QDL flashing. Remove the program with the following:

If you need ModemManager, you can simply stop it from running with

and restart it with:

Move into the project directory:

This will install the qdl program into /usr/local/bin

Test the install by running the following and verifying the output:

Move into the ufs sub-directory of the unzipped release:

In order to force your VOXL2 into EDL mode, slide the SW2 switch into the ON position, see below: 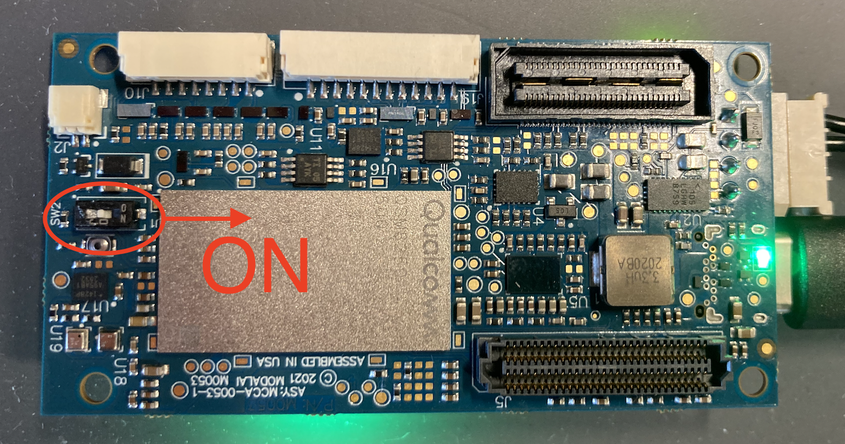 Now plug in power and USB-C cable from VOXL2 to host PC.

While in the ufs sub-directory of the image release, run the following qdl command in order to flash the device:

The qdl flash will take around 10 minutes to complete (may be faster or slower depending on hardware and USB cable).

Once completed, remove power and USB from the VOXL2, slide SW2 switch back to the OFF position.

You can now plug in power and USB and after a short time (first boot after QDL takes slightly longer than following boots) ADB will be available.

Verify that the flash was successful by checking the installed image version:

This version should match the image you just flashed.

Now that your VOXL2 has been reset to the factory image, install the latest System Image release by following the instructions here: VOXL2 System Image