VIO on Sentinel is disabled by default. The service file for VIO can be started by configuring the qvio server:

It will show the following prompt:

Enter 1 (yes) to enable the service. This will immediately start VIO and enable it on boot.

In order to check if VIO is running you can check with the following command:

This will show you the status of the voxl-qvio-server.

If the status displays active(runnning) then VIO is running and the VIO data is being sent to PX4.

If the status displays failed then VIO failed to run. Make sure that camera index 2(downward facing tracking camera) and PX4 are running.

To restart VIO, you can simply restart the service file:

VIO should be restarted and the drone should be idle before any flight where VIO will be used.

VIO data can be viewed by manually running the voxl-camera-client command:

NOTE A library path was set for this command, if you’re command doesn’t execute, inside your adb shell run ldconfig

This will print out position data in the following format:

T_imu_wrt_vio represents your drones XYZ position in meters from your starting position. To validate this data, you can move the drone forwards and observe as the X value increases.

Once voxl-qvio-server is running, confirm quality data before flight by opening the mavlink inspector and checking that X&Y values are non-zero in the ODOMETRY mavlink telemetry packets. 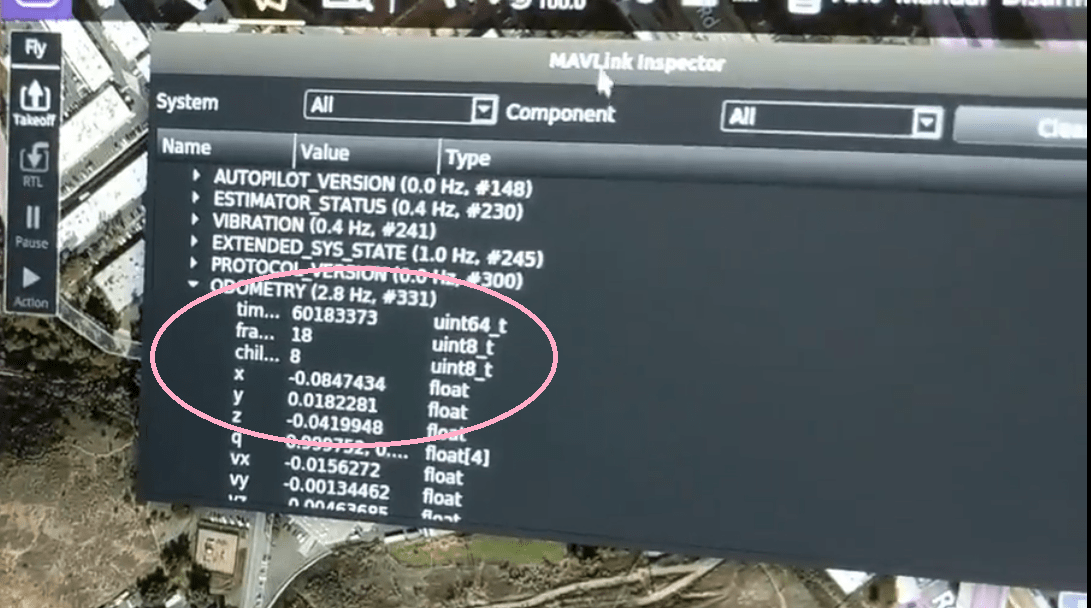 Alternatively, if your computer running QGroundControl has its volume turned up you should hear it announce the swap from “manual” to “position” mode when you flip the flight mode switch from up to middle. If VIO data is not being transmitted, the system will fall back to altitude mode and you will hear “position mode rejected, altitude flight mode”. In this case, go back to manual flight mode (switch up) and wait a few more seconds for voxl-qvio-server to finish initializating.

If this doesn’t work, go back to “Viewing VIO Data” and reconfirm VIO is working with voxl-qvio-client. You can also check the voxl-qvio-server systemd service for indications of what might have gone wrong. We have a VIO parameters file helper located here to help easily configure into VIO or GPS mode. Specifically the EKF2_AID_MASK is often overlooked as an important parameter for VIO flight.